Background
The concomitant increment of breast cancer and obesity across Western populations in the past 50 years may suggest a causal relationship. Evidence suggests that interaction between the cancer cell and the tumor adjacent adipocytes can explain the malicious phenotypical behavior of some tumors through paracrine signaling and by inducing inflammation. Recently, this phenomenon has been recognized as one of the new Hallmarks of Cancer. There is also a clear link between obesity (BMI above 30kg/m2) and breast cancer incidence.

This micro environmental interaction may also be used to explore new molecular and metabolic profiling, in cancer cells and in liquid biopsies, to establish novel biomarkers for an early warning of systemic relapse

Aims
We aim to improve the definition of breast cancer through by studying the role of inflammation at the invasive front of the tumor. This micro environmental interaction may also be used to explore new molecular and metabolic profiling, in cancer cells and in liquid biopsies, to establish novel biomarkers for an early warning of systemic relapse.

Design/methods
The study design is exploratory /cross sectional study. It consists of two parts and is powered to enroll 75 patients from the PBCB-cohort. We have developed an original protocol for adipose tissue in relationship to the primary tumor. Sampling and a pilot study showed excellent yield of RNA from adipocytes included morphological control. Part 1 comprises analysis of gene expression to identify inflammatory factors involved in the paracrine signaling between the invasive fronts in 12 Luminal A (Lum A), 12 Luminal B (Lum B), 12 HER-2 and 12 Basal Like (BL) breast cancer subtypes and the juxta-tumoral paracrine tissue (n=48 all together) In part 2 the systemic effect og BMI on the paracrine signaling is explored.

Characterization of the potential correlation between factors from part 1 and related to three Body Mass Index (BMI) groups with 25 patients in each group (n=75 all together). Presently, 20 patients are enrolled and accrual is ongoing. 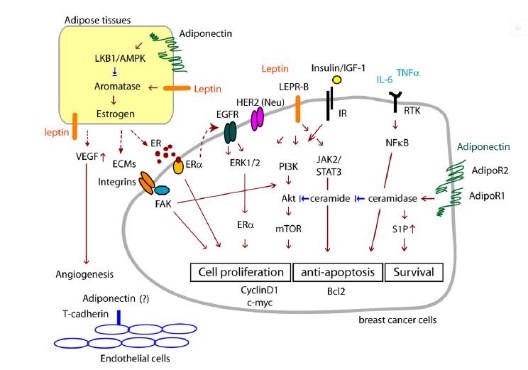